The flagship energy proposal by the European Commission, the “Clean Energy Package for All Europeans”, to be discussed at the upcoming Energy Council meeting, calls for a 30% binding energy savings target.

Despite this glaring disparity (whose evidence is provided by the Commission's own modelling), the EU executive and EU leaders keep claiming about Europe's commitment to the Paris Accord. Perhaps significantly, the newly elected French President, Emmanuel Macron, sounded out to #Makeourplanetgreatagain through an effective implementation of the Paris Agreement. This call was the French – and to some extent the European – reaction to the US president's decision to withdraw from the Paris accord.

The Energy Council meeting on 26 June is an opportunity for ministers to show leadership on the low-carbon energy transition and make good on the commitment made in Paris. Will they seize the opportunity and make Europe great again?

It ought to be hard for member states to argue against a binding energy efficiency target as the Commission's proposal omits additional instruments. However, the level of ambition proposed by the Executive is far from satisfactory. A 30% energy savings target means less savings in the period 2020-2030 compared to 2010-2020 as shown by the Commission's own modelling results. 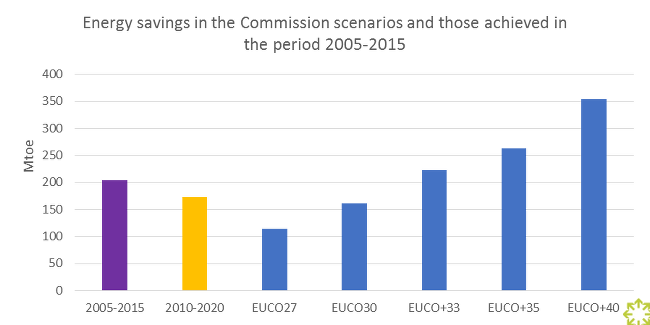 A 30% energy savings target also means less savings than those achieved during the period 2005-2015. Although, we should remember that part of the savings, during the previous period, is due to the financial and economic crisis that we are still not completely out of.

Making the planet great again, as called by the French president, should start at home. A successful slogan, on social media, intended to challenge the US president is not enough. It is clear that Europe cannot meet its obligations under the Paris accord without an ambitious energy transition.

It is also clear that energy efficiency and renewable energies are the only two pillars for this transition. The Commission's modelling results provide evidence for the need for higher efficiency ambition. Based on these results, energy savings in the upcoming period (2020-2030) would be double those of the current period (2010-2020) if a 40% target is considered for 2030.

A 40% energy savings target will plant the seeds for Europe to be on the Paris track. Moreover, if our leaders are serious about Efficiency First, then maybe they should make efficiency first.

Beyond climate change, a 40% energy savings target is also about improving the competitiveness of Europe. It is about more jobs and economic prosperity. Importantly, a 40% energy savings target increases the number of life years in the population due to lower emissions of dust particles known as PM2.5 (by almost 17 million compared to the current target of 27% energy savings). Combined with reduced premature deaths due to reduced ozone pollution, this could translate to an average annual cost reduction of €43 billion.

Put simply, the equation amounts to this: arguing for less than a 40% energy-savings target means arguing for more premature deaths in Europe. Will our democracies survive such an argument? Wait and See!

This column was published for the first time on June 22, 2017 on Euractiv