Energy renovation: It’s time we get serious about it!

I am not sure if this is good news – or scary news! Here we have two Directives related to buildings under revision in the EU, and their messages are confusing at best. Let's take a closer look at them.

The impact assessment, accompanying the proposal amending the Energy Efficiency Directive (EED) -included in the “Clean Energy for All Europeans” package- projects the building sector to lead the transition of energy demand in Europe. 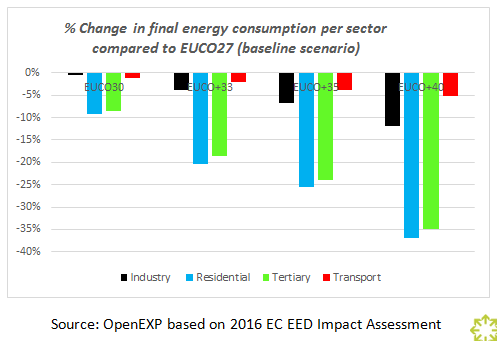 Based on PRIMES results, such reductions in final energy demand in EU buildings would be possible by increasing the average renovation rates as listed in table 1.

These figures would have been good news, if the PRIMES modelling's published renovation rates were those used as inputs for the modelling of the Energy Performance of Buildings Directive (EPBD), rather than those listed in table 2. Unfortunately, it doesn't seem to be the case. Instead the renovation rates used in the impact assessment of EPBD are much lower. We see the highest ones corresponding to the resulting ones for EUCO27 (see table 2). Moreover, the deepness of the renovation required to ensure that buildings will actually lead the decarbonisation process of the demand side is just not there. The EPBD modelling assumes an incremental increase of 5% improvement in the quality of the envelope compared to the current situation (see table 2).

Yet, I must admit, the more I understand about the EED and the EPBD impact assessments, the more puzzled I am by them.

But this is not the end of the story. Looking at the present policy proposal from the Commission and especially to the proposed changes to EPBD, I get even more scared...

The changes proposed to EPBD include i) setting milestones for the decarbonisation of the building stock by 2050, ii) clarifying provisions in the "cost-optimality calculation methodology", iii) improving performance of technical building systems, iv) improving the quality of energy performance certificates, v) developing a smartness indicator, and vii) including requirements on electro-mobility.

While at least in theory, each of the proposed changes will contribute somehow to improving the renovation process, none of them will trigger energy renovation. And it’s not by making finance available, though it’s only part of what is needed and only until 2020, through the "Smart Finance for Smart Buildings" initiative that necessary renovations rates would be reached.

Strengthening the policy proposal for buildings should be a top priority for the parliament given the expected role of buildings in the EU energy transition and our obligations under the Paris Climate Agreement.

This post was published for the first time on March 7th, 2017 on eceee